Share a memory
Obituary & Services
Tribute Wall
Read more about the life story of Phillip and share your memory.

Phillip Killsfirst Sr. 77 of Apache, Oklahoma passed away January 11th at his home. Phillip was born on September 1, 1945 in Lawton, Oklahoma to May Komardley Killsfirst and Benjamin Killsfirst.  He was an enrolled member of the Apache Tribe of Oklahoma and was also an Oglala Sioux Descendent. He was a descendent of Red Cloud, Crazy Horse, and American Horse.

He attended school at Porcupine, South Dakota as a child before the family returned to Apache to reside he then attended Boone School . He would attend Apache High School.

He dropped out during his Senior Year of high school in 1966 to take care of family, He was drafted in the Army and later deployed to for Combat in Vietnam. While stationed in Fort Polk, Louisiana, for training, the military made him take his GED test and he passed.  He was Honorably discharged in 1968.   He was honored as a Special Graduate in 2014 at Apache High School. He would later attend and graduate from Oklahoma State Tech, Okmulgee, OK with a diploma in Air Conditioning and Refrigeration. He worked for Woodwards Furniture, South West Inter Tribeable inc, CDI Home Builders.

He had a passion for horses, owned, and had them registered with the National Quarterhorse Association. His main hobby as he got older was to care for his horses.

While at Boone he met the love of his life Inola “Tho” Starr, they would later marry and start their family. They spent their lifetime raising their children, grandchildren and great grandchildren. He was the best Grandpa and always had a drink and snack waiting for his grandkids. He was a quiet, gentle man but had a Huge Heart for his family and grandchildren. He was well known in Apache for his expertise in HVAC and plumbing skills.

He was given his Indian Name at a Peyote Meeting in South Dakota while he was deployed. His dad Benjamin stood in for him and danced for him. His Indian Name is “Tatanka” translated as Bull Buffalo. His name means “Someone who takes care of his family.”

To send flowers to the family or plant a tree in memory of Phillip Killsfirst, please visit our floral store. 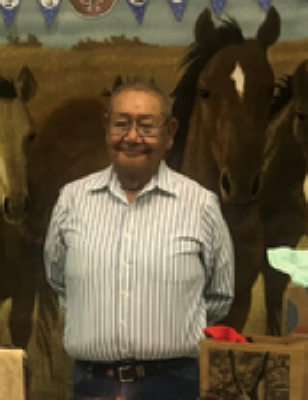